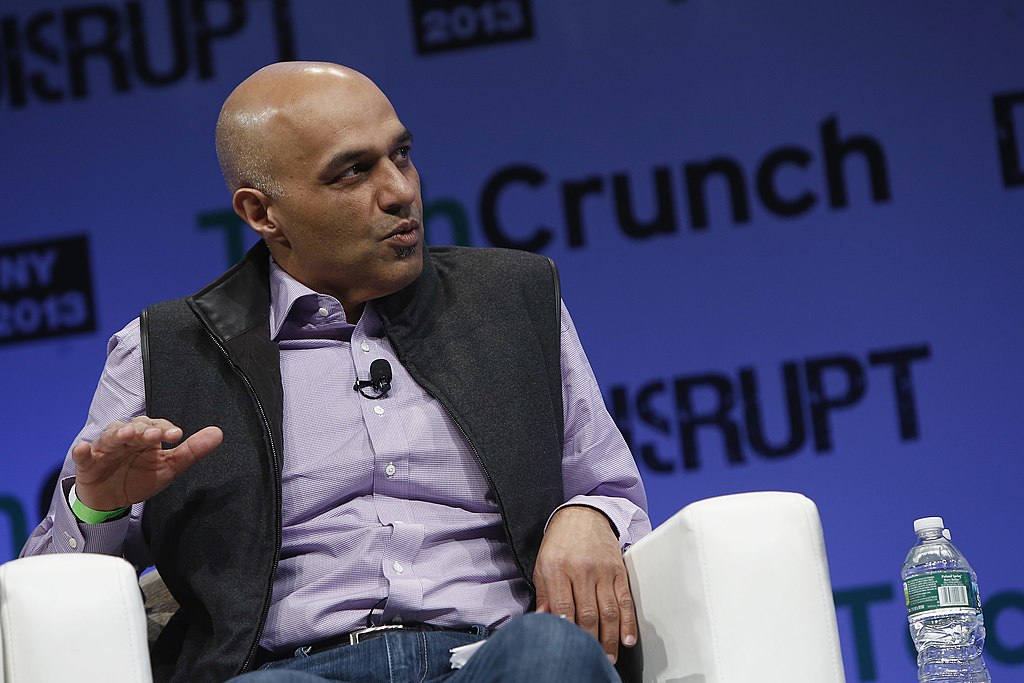 Thinking of working with Spring Free EV or Sunil Paul? Before you do, understand they don’t honor their contracts. 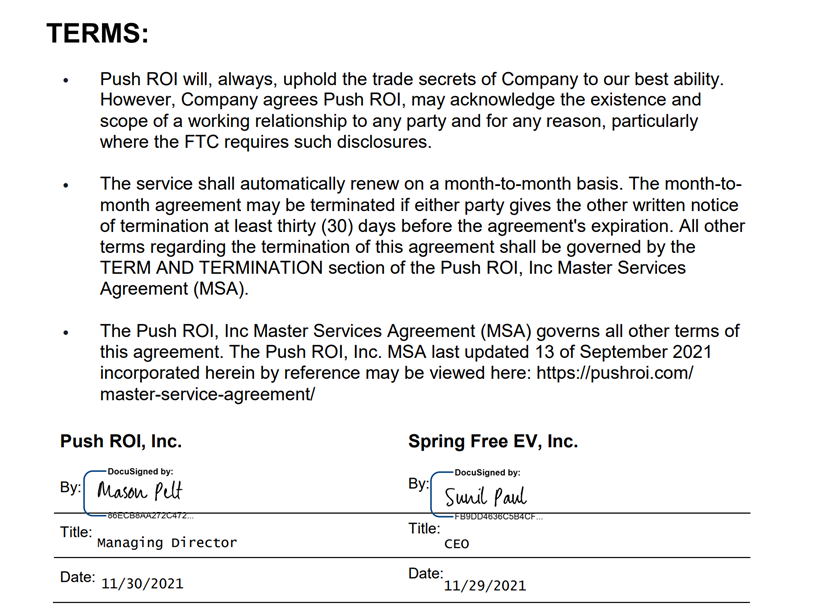 Only after the contract was fully executed did Spring Free EV’s representative Visrin Vichit-Vadakan, demand I sign an adhesion contract on behalf of Push ROI. The new adhesion contract overwrote some terms of the already executed agreement. Visrin Vichit-Vadakan informed me that Spring Free EV would terminate that executed agreement if I didn’t sign this never-before-mentioned document on behalf of my firm. Spring Free EV had no contractual means of ending that agreement with Push ROI for this reason.

In plain terms (apart from bankruptcy provisions), the agreement was uncancellable for a four-month engagement with a minimum fee of $22,000 due to Push ROI. The fact that the agreement couldn’t be terminated for convenience during the initial period had been explicitly clarified during the negotiation. And as it’s a generally bad practice to allow one party to edit the contract on demand, I refused to sign the new document. 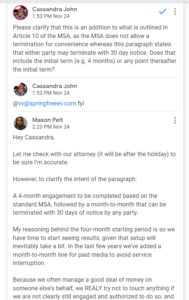 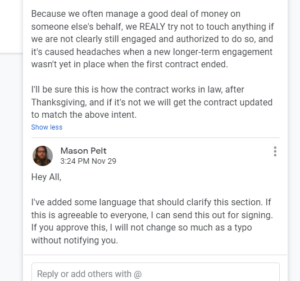 True to only this one aspect of their word Spring Free EV refused to honor the contract they entered into with Push ROI. They also refused to pay out the balance of the agreement they signed after breaching and further rejected the reasonable attempts at negotiation Push ROI’s lawyers made in January of 2022.

Visrin Vichit-Vadakan clarified that Spring Free EV waited to introduce this document until after signing a contract with Push ROI, because the agreement they furnished is intended to function as an addendum to vendor contracts. Everything Spring Free EV has said supports the idea that they intentionally failed to negotiate terms they wanted, with the expectation of adding those terms later with a new non-negotiable term sheet claiming supremacy over prior contracts with vendors.

At no point in any settlement negotiations did Spring Free EV so much as argue that Push ROI’s contract was contingent on the signing of an additional term sheet. In fact, the only argument any lawyer for Spring Free has made is that the agreement doesn’t meet mutual assent. Something that is laughable, given the volume of emails between Push ROI, and Spring Free EV negotiating specific clauses in the contract, and directly refuted by Visrin Vichit-Vadakan’s phrasing “we will have to revoke our partnership” in the email terminating the contract.

$22,000 is not an inconsequential amount of money but an amount that makes damage recovery tricky. It’s a flaw in contract law; Push ROI will easily spend more than the value of the contract trying to recover damages. Spring Free EV, as a finance company would be well aware of this. Even with the fee recovery provisions in the contract and under Texas law, Push ROI will only be entitled to recovery of “reasonable attorney fees”.

As you can imagine, courts don’t generally deem it reasonable to spend $30k recovering $22k. Push ROI’s costs are already past what courts are likely to consider “reasonable”. Morally I want to spend the money to have a court record showing how transparently Sunil Paul and Spring Free EV disregard their contracts, however it’s clear that Spring Free EV is not ethical. Spring Free EV is a finance company, a subset of businesses known for hiding assets to avoid someone collecting on a judgment.

Logistically, at this time, my company can’t be the one to get this past the finish line. So this blog post will hopefully serve as some warning to others. I didn’t get a warning. When I researched Sunil Paul and Spring Free Ev before taking the first meeting with them, I saw only a few dozen articles about old startups.

But as I said in an email to one of Spring Free EV’s lawyers. 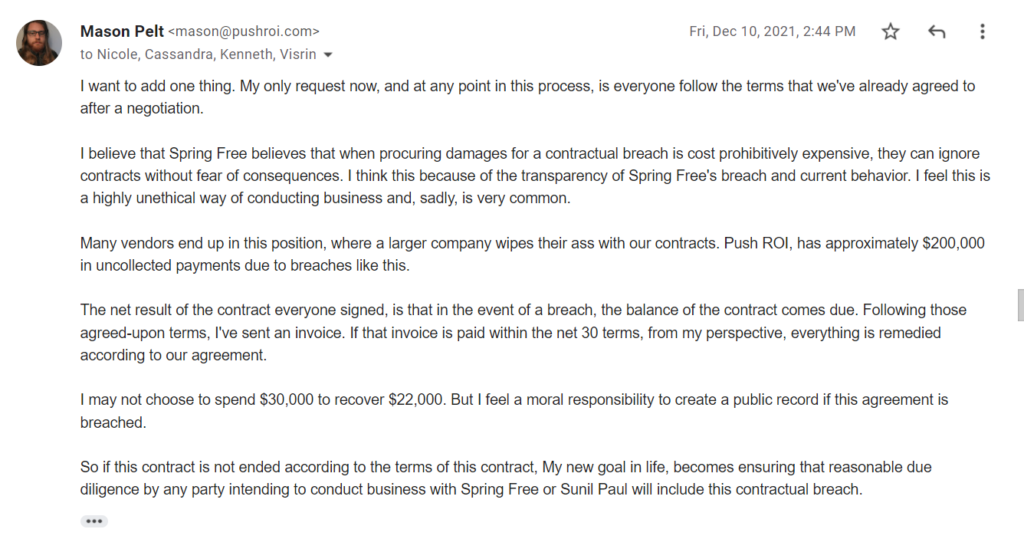 “I want to add one thing. My only request now, and at any point in this process, is everyone follow the terms that we’ve already agreed to after a negotiation.

I believe that Spring Free believes that when procuring damages for a contractual breach is cost prohibitively expensive, they can ignore contracts without fear of consequences. I think this because of the transparency of Spring Free’s breach and current behavior. I feel this is a highly unethical way of conducting business and, sadly, is very common.

Many vendors end up in this position, where a larger company wipes their ass with our contracts. Push ROI, has approximately $200,000 in uncollected payments due to breaches like this.

The net result of the contract everyone signed, is that in the event of a breach, the balance of the contract comes due. Following those agreed-upon terms, I’ve sent an invoice. If that invoice is paid within the net 30 terms, from my perspective, everything is remedied according to our agreement.

I may not choose to spend $30,000 to recover $22,000. But I feel a moral responsibility to create a public record if this agreement is breached.

So if this contract is not ended according to the terms of this contract, My new goal in life, becomes ensuring that reasonable due diligence by any party intending to conduct business with Spring Free or Sunil Paul will include this contractual breach.”

You may still choose to work with Spring Free EV or Sunil Paul, but I want to make sure that you’ll get an option to see how the man and his company behave. That’s an option I didn’t have, when I Googled Sunil Paul his online reputation appeared carefully managed since back when Cuil was a relevant search engine.

Nearly a month later on March 15th, 2022 Push ROI published this blog post, in the hopes of warning others about Spring Free EV’s bad faith approach to contracts. The allegations that Push ROI has made publicly since March 15th, 2022 have remained entirely undisputed by Spring Free EV until an email on August 12th, 2022, offering no specific factual disputes.

When Push ROI requested a statement defending Spring Free EV’s actions, on August 2nd, 2022 in an email, and on Twitter referencing the email Spring Free EV provided no response, apart from blocking Mason Pelt on Twitter.

Despite all this on August 12, 2022, Spring Free EV’s Lawyer Rob Sayles sent the following email.

“Spring Free EV desires to resolve the dispute with Push ROI. The process would be easier if we enter into confidential settlement discussions, which is the normal process for business disputes like these. We will not be able to resolve this dispute if you are not willing to speak with me over the phone, you post our communications on social media, and you and Push ROI continue to make allegations about my client online. Spring Free EV disputes these allegations. That being said, my client would still like me to visit with you to see if the parties can reach a resolution of this matter. Just contact me at the number below if you would like to discuss a potential settlement.

If you again reject my request to visit about resolving this matter, I ask that you publish this email in full in any publication or post you make and/or submit regarding this dispute. My client does not plan on discussing this dispute over social media, but is willing to do so through a normal business process. If my client needs to take this dispute to court instead, then we are willing to move forward accordingly. But my client hopes we can resolve this matter quickly and allow each of the parties to return to their regular business.”

Push ROI, eagerly awaits any specific dispute of facts or justification of behavior from Spring Free EV. Push ROI, Finds the threat of a SLAPP lawsuit amusing, and finds the implication that Push ROI did not attempt to negotiate this contract using the “normal process for business disputes” laughable. When this blog post was published, all other financially viable means of dispute resolution had been exhausted.