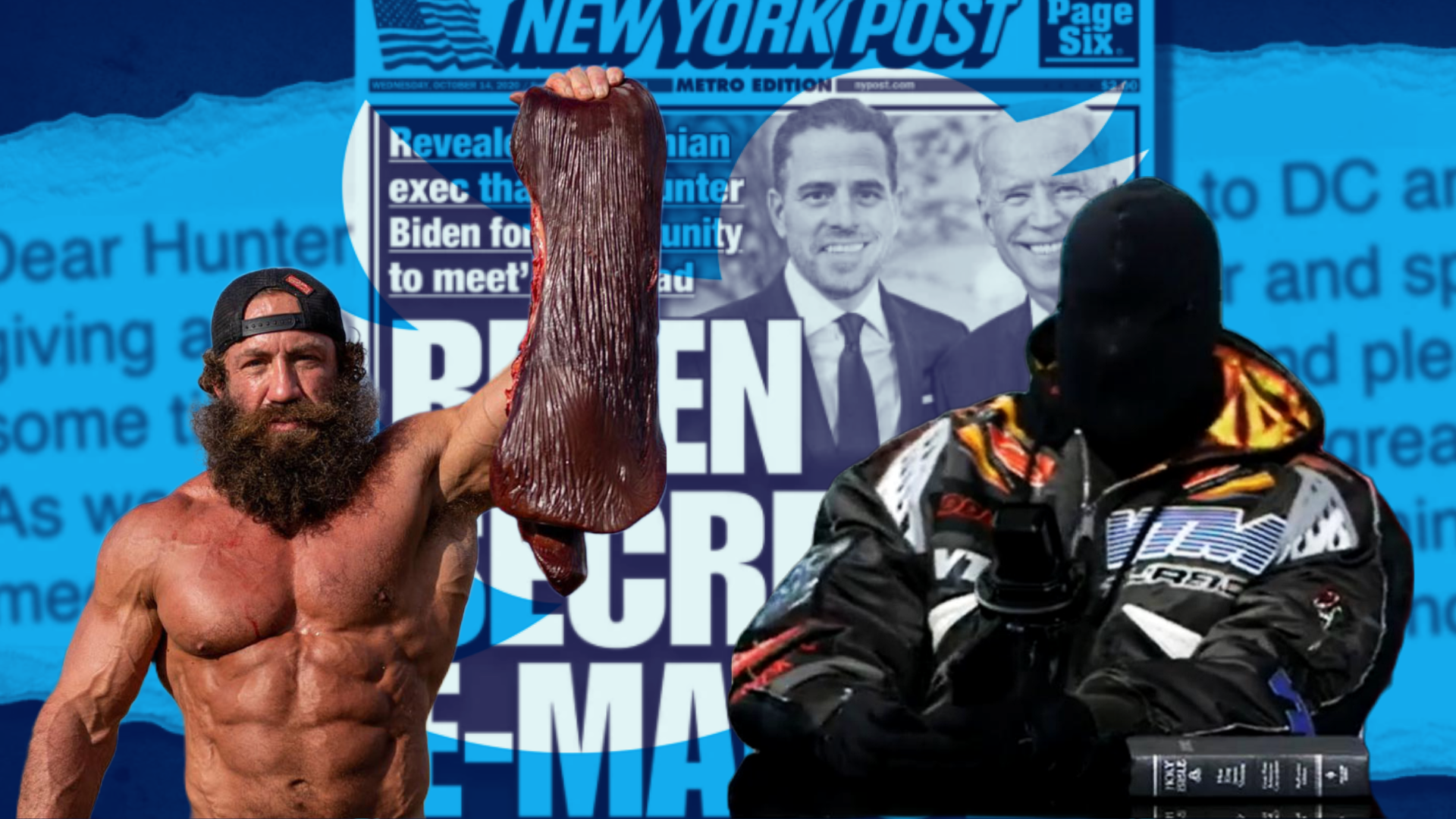 By Mason PeltDecember 9, 2022No Comments

If a single thread connects Liver King getting “outed” for steroid use, Kanye West (now Ye) making an insane appearance on InfoWars, and the “Twitter files,” it would have to be two threads. First, some people see what they want to see. Second, others use those people to make money.

Like a mirage brought on by wishful thinking, people maintained that the Liver King was natural. Not most people. The vast majority of humans who saw the Liver King knew he came from a test tube. If you needed topical experts to believe, the likes of IFBB Pro Greg Duceset, Meds School Prof. Andrew Huberman, and Joe Rogan confidently stated that the king of the liver was on the juice.

YouTuber More Plates More Dates, who ultimately showed the emails proving Liver King was indeed on gear — A gram and a half of juicy vitamins and approximately 476 gallons of growth hormone a month — published a video a year ago explaining that liverwurst must be on steroids. Those videos didn’t stop Liver King from gaslighting the world on some of the biggest fitness podcasts. The king maintained to Mark Bell, Kenny Ko, and Bradley Martyn, among many others, that he never touched the sups you get behind the GNC.

As a marketing tactic, it worked. I don’t think liver man sold the hundreds of millions in supplements and info products he’s claimed. But I expect it was between $10 and $ 20 million in sales.

The raw organ meat-eating fitness goblin desperately needed people with a faint hope that his method built his body. Much like the way fake gurus sell info products, a shadow of a whisper’s worth of belief that the product could work, and enough brand impressions is all it takes to drive sales.

People will see what they want to see. For Liver King, it was a jacked man with a crazy beard saying he had the keys to health no one else would tell you. For Ye, many people seemingly want to make an allowance for the behavior. Maybe they cannot separate the art from the artist, or they are just trying to show compassion for the mentally ill.

A nontrivial amount of people have defended Kanye by saying, “Ye is reflecting the concept of being Christ-like & loving everyone.” or that he’s being taken out of context.

It’s fair to say that Ye’s quotes are not being viewed within the context of the long, incoherent rants they were given. Also fair to say that in context, most of the quotes look worse, not better.

“They did good things too. We’ve got to stop dissing the Nazis all the time.”

Ye, formerly known as Kanye West, just went on Alex Jones. On the topic of Nazis, he said “They did good things too, we’ve got to stop dissing the Nazis all the time.” Ye is a terrible person. He’s not misunderstood. This isn’t just mental illness. He’s 🗑️ pic.twitter.com/xnTA9xnzjs

“I like Hitler. [Alex Jone Says he doesn’t like hitler] I’m not trying to be shocking, I like Hitler. The Holocaust is not what happened, let’s look at the facts of that, and Hitler has a lot of redeeming qualities.”

Kanye ‘Ye’ West: “I like Hitler. … I’m not trying to be shocking, I like Hitler. The Holocaust is not what happened, let’s look at the facts of that and Hitler has a lot of redeeming qualities.” pic.twitter.com/UwCu2ZJfid

“There are a LOT of things I LOVE about Hitler.”

The scale of the anger and disgust I feel about this man is quite unreal. pic.twitter.com/6XqMQMH5F0

And the use of a small aquarium net to represent Benjamin Netanyahu, voiced by Ye, to talk about controlling banks.

Those are a few quotes. In context, they are long rants filled with anti-Semitic tropes.

Ye’s rants most certainly reflect mental illness. When Ye still went by Kanye, he went public with a bipolar diagnosis. Bipolar disorder can be seen with medical imaging. Whatever hormones and neurotransmitters are involved, where electrical activity occurs in the brain is changed in those with bipolar disorder.

Mental illness has historically been stigmatized, and the pathology is not well understood in comparison to most other illness. Neuroscientist Robert Sapolsky has spent much of recent years arguing against the death penalty, on the grounds that if anyone had an identical brain and experience as a murderer or mass murderer, they would have done the same thing.

In some lectures, Sapolsky talks about his contradicting beliefs, like wanting to torture Hitler, who was evil, but also not believing that evil exists. Some argue Ye meant something along those lines. Arguments I find impossible to accept for Ye. Perhaps because Sapolsky isn’t pals with Nick Fuentes, maybe his lack of Holocaust denial, the fact Sapolsky was raised in Orthodox Judaism, or that he doesn’t wax poetic about Hitler’s “redeeming qualities,” but I don’t find his statements abhorrent.

I don’t think I’m just giving Sapolsky a pass and condemning Ye due to the context around them. The statements, not just the speaker’s context, differentiate Ye’s from Sapolsky’s. Sapolsky wants to explain why evil happened and expresses a cogent argument. Ye at best tried to deny the Holocaust happened and, at worst, attempted to justify it

But if someone wants to win a game by repeating, “the card says moops” they can argue that Ye, and Sapolsky are saying the same thing. Some people surely have been arguing for the sake of arguing. Most I expect are seeing what they’d like to be true.

Now onto the “Twitter files”, a collection of documents Elon Musk released to (and cynically via) independent opinion journalist Matt Taibbi. These documents show Twitter’s reasoning behind why the briefly suspended distribution of a New York Post story about Hunter Biden’s laptop.

Now onto the “Twitter files”, a collection of documents Elon Musk released to (and cynically via) independent opinion journalist Matt Taibbi. These documents show Twitter’s reasoning behind why the briefly suspended distribution of a New York Post story about Hunter Biden’s laptop.

Except for releasing a few emails (showing what you’d expect), everything Taibbi revealed was already publicly known. Here are the bullet points.

Almost everything stated in Taibbi’s Twitter thread was covered by The Guardian days after the controversy. It could be shocking to people without a general understanding of large company org charts. But a lot of people who are at large VC firms have been faining shock.

I doubt Eric Weinstein, a managing director of Thiel Capital, is surprised that Twitter’s deputy general counsel reviewed internal documents before releasing them to journalists. I’m skeptical that Jason Calacanis, who was meeting with advertisers on behalf of Twitter after Musk took over, is astounded that Biden’s campaign had contacts to report policy violations, which sound identical to the contacts of larger Twitter advertisers. And I’ll believe when I see proof that hell froze over that David Sacks the co-founder and partner at Craft Ventures and investor in Palantir, found any of the rehashed information valuable.

The folks above, and many others, are not arguing like George Costanza. They are not trying to win without conviction, nor are they hopeful that believing something will make it true.

They are team Musk, and they want to be on the winning team. Like Liver King, and The Yeezy, team Musk is mobilizing people who, stupid and well-intentioned, stupid trollish, or intelligent and trollish, can make money for the team they support.

Bari Weiss dropped a second Twitter Files installment between writing and publishing the above. Much like Taibbi’s, nothing was revealed, even with bad faith hand ringing about use of the word “shadowbans.” To avoid ballooning to 2,000 words, I’ll summarize with Mike Masnick’s Tweet.

“So we’ve now had two long threads, presented as if they were revealing some big conspiracy, that basically, just… confirmed a bunch of things the company had already said publicly, and showed pretty standard (boring) trust & safety work.”

So we’ve now had two long threads, presented as if they were revealing some big conspiracy, that basically, just… confirmed a bunch of things the company had already said publicly, and showed pretty standard (boring) trust & safety work.

Mason Pelt is the Managing Director of Push ROI.